CESD Gender Development Group is committed to promoting gender equality and empowering women and girls throughout Azerbaijan. CESD believes that working towards eliminating gender inequality is crucial to building a safe, progressive, and flourishing society in which all individuals have an equal chance of participation, regardless of their gender.

The Gender Development Group's mission of bringing light to gender statistics through rigorous research is crucial to understanding the extent of gender inequality in Azerbaijan. This allows the Development Group to present policy recommendations, as well as build new bridges between citizens and the government to find solutions to emerging problems. As data collection and research is the first step, CESD Gender Development Group also performed to conduct projects in collaboration with NGOs and government institutions which will alleviate the situation of women and girls who are facing inequality and aim at empowering them by conveying the idea that gender equality is a fundamental human right.

CESD Gender Development Group's current and past research focuses on issues such as sex-selective abortion, violence against women and girls (public and private sphere), child and forced marriages, and the economic participation of women in Azerbaijan. The Development Group has also conducted projects aimed at empowering women, such as increasing the economic participation of rural women in Azerbaijan with funding from the EU. 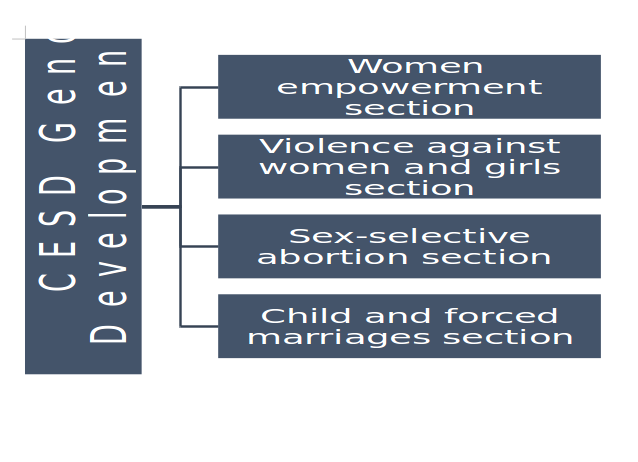 The pioneering research paper updates the recurring review on the state of women empowerment in Azerbaijan taking into account the post-Soviet Union countries. The updated women empowerment research aims to assist these countries to achieve their medium-term development targets, fulfill its global obligations under the Sustainable Development Goals (SDGs) agenda and to formulate policy objectives integrating women into the labor force and supporting inclusive development. The focus is on three pillars: (i) the current state of female labor force participation; (ii) challenges they face; and (iii) and provides further recommendations. In both, namely, policies and countries’ development agenda, gender equality is to be included into each of these development programs.

Azerbaijan has been gradually ranked lower in terms of its gender equality indicators like the political empowerment and estimated earned income of women (Gender Gap Report, 2022). Sex selective abortion has considerably risen in the past thirty years in and currently Azerbaijan holds the highest level globally. If the sex ratio at birth (SRB) is higher than the natural range, then there is sex-selective abortion taking place. A stratification is seen through the regions of Azerbaijan in terms of the SRB. Most of the regions with highest SRB are in southern regions. Half of the fourteen economic regions in Azerbaijan have seen a decrease in the SRB within the past ten years, three have seen an increase and four have not experienced a significant change...